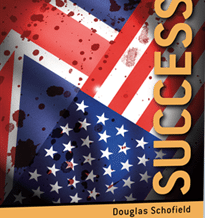 Douglas Schofield is getting some much deserved buzz regarding his newly released book, Succession. It has already grabbed Hollywood interest as it has been optioned by Sidney Ganis who intends to produce Succession the movie. See Youtube video below. We could not be prouder of our client’s success!

Here’s a recent email from Douglas regarding the scheduled book signing in Cayman Islands.

Melody and I have just returned from meeting with book store manager at Camana Bay. There’s a big poster at the store entrance about the launch — it’s a huge version of the e-vite. Speaking of the e-vite, the manager says the RSVP response to the e-vite has been “unbelievable”.  She said, “It’s the biggest response we’ve ever had for a book signing!” She’s clearing the decks for a blowout crowd and bringing in more chairs.